A new version! We changed / added / fixed a lot again in version 3.0. Check it out below.

Great news! Version 3.0 works with an embedded Java build and we selected the OpenJDK 17 version for this. This means no more issues with updating java and issues with licenses and issues with other Java requiring applications. This does mean that this is a breaking update and you need to manually install this version and uninstall the previous version.

With the new embedded Java come new perks. One of these is that we can now offer the update process within the app itself. This means you will get a notification of new updates in the new notification center.

Version 3.0 comes with a new control. No longer are buttons the only way to control your software and other services. You can now use Sliders for multiple systems.

Example of a Slider controlling a Windows Audio Source

To use a slider you can add a connector to the slider that will make the connection between the software and Touch Portal and controls the given attribute. Below is a list of all currently added connectors. Plug-ins are also able to add connectors so expect this list to grow.

We have changed the design of Touch Portal with this new version. Below is an overview of most of the changes

We have re-designed the whole main screen. User interviews showed us that the current menu was not really understood correctly by our users. So we decided to change the left sided menu to a more visually clear vertical tab menu structure. We have changed the whole design with a color-theme to allow for more popup of the elements that the user controls. Better clarity will in improve usability. 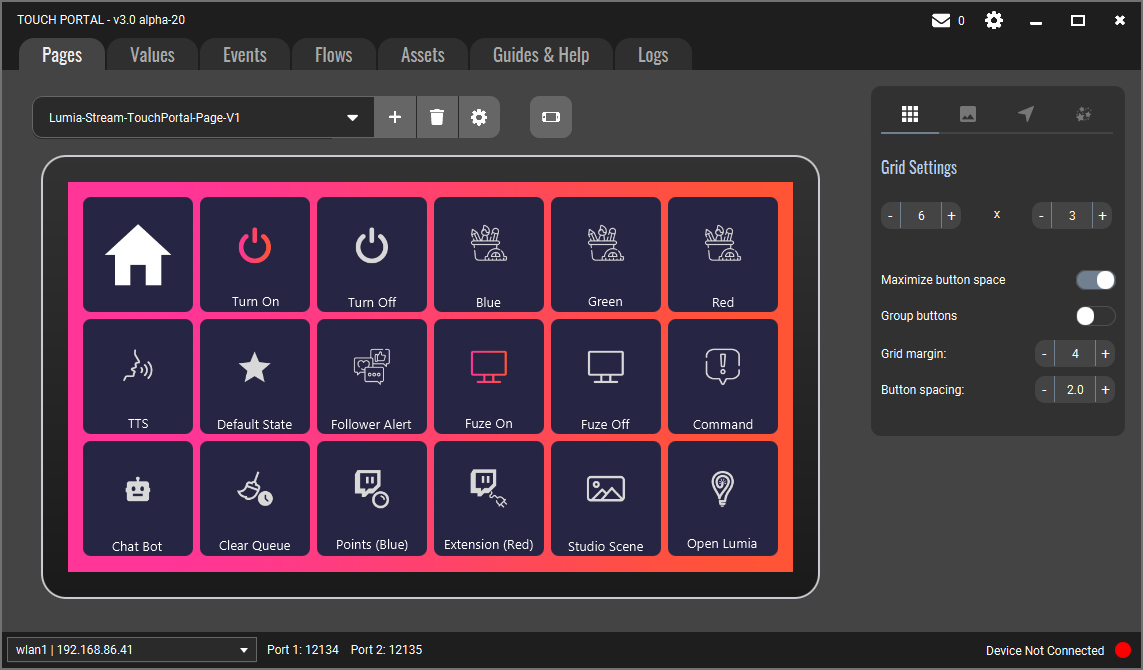 With more and more functionality in Touch Portal we need additional space for options that are relevant and useful for the users. For a more consistent look and feel, we have also redesigned the Page settings to use tabs. This allows you to quickly selection the settingsgroup you want to edit. No more endless scrolling and searching for the correct option.

We also improved all elements in the settings list and added more descriptions to aid new users and to allow for a better and more noticable visualisation of controls.

Using the same principles we've completely redesigned the button edit screen. Each tab will show a specific set of options that allows you to change a specific topic for the control.

We have made small improvements, such as positioning the connection controls better centered and other many more. The Touch Portal settings screen also follows the new design.

We have reworked the Page selector tool and added several things to improve the quality of life.

You are now able to add folders and place pages in folders to give more structure to your set up.

Exporting pages will give you more options to include in your export. You can add flows and values that are used on your page. Additionally, you can also add files that are referenced outside of Touch Portal such as media files and text files.

Add the specifics to your export

Since the beginning there was our flat white icon pack with a collection of useful icons but they were not that complete. So from this version we have added a few new icons to use straight out of the box. We have added icon packs for the following categories:

Notifications will have different priorities and will show different coloring to indicate these priorities.

Another great addition this version is the integration of OBS.Live. With the help of the great people from StreamElements we have added a full integration for everyone with the free base version of Touch Portal. Here are the actions available to everyone (no Pro upgrade required):

We have added our first iteration of our Photoshop Integration. You can use the following actions:

All available Photoshop actions and events

Controlling Photoshop has never been easier with Touch Portal. No more spending key combinations for all the above mentioned actions..

To really get you started quickly we have added an icon pack for photo editing software. The pack is called Touch Portal Essentials Photo Editing.

You can select the option to check for titles instead of processes. This will allow for a more sophisticated auto navigation structure. Touch Portal will always check title settings first before it checks processes for auto navigation.

Sometimes you want a page to be triggered for multiple processes. You can now use the semicolon character to separate entries and each entry will be used to check if the page needs to become active for the process you activated on Windows.

It is becoming a tradition to also improve the user experience each update as well. This time with the redesign we took some time to improve quite a lot!

Number pickers have had visual upgrades but we also improved how they work. With the new number picker controls you can scroll through the numbers using the scroll wheel of your mouse.

On several views we have increased the scroll speed. This will help you get to the places you need to go faster.

Like already mentioned in more detail above, we have improved the page management controls by integrating adding page folders, giving more control about im- and export options and improved visuals.

In the previous version of Touch Portal text on a button was always in one of the same three locations on a button. With version 3.0 you are able to add an offset to this to position the text in almost every location. This will be especially handy for users that are using the Edge Graphics Upgrade as they can from now on position the text correctly in regard to the borders.

You can now change the vertical offset of the text of a button.

The same as above but for horizontal movement. This will allow you to place your text precisly where you want it to be.

We have improved the inner workings of the OBS integration, no more need for timers and more reliable operation. But we didn't stop there:

Touch Portal v3.0 will create and keep 3 automatic backups that can be restored manually if something went wrong. These backups will show up in the settings tab but cannot be automatically restored. These three backups will be from the last three days Touch Portal was used. This means that every time you start up Touch Portal, if it's the first time that day a fresh backup will be made deleting the backup from three days ago.

We have added new functionality and improvements to Touch Portal for our API:

Most bug fixes are already mentioned in the sections above but we also fixed some bugs not in those categories: